Why the Australian Housing market will remain resilient 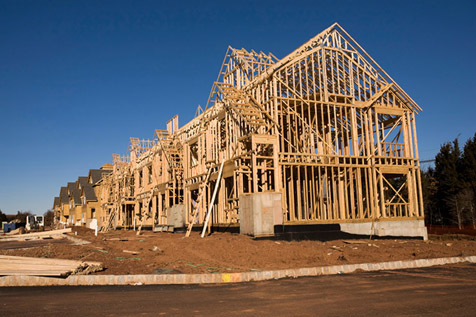 Why the Australian Housing market will remain resilient

There has been much speculation in recent times as to whether Australian dwelling prices are overvalued and whether or not a price bubble has developed.  Some believed the market would crash after the GFC whilst others predicted solid growth in prices on the back of a shortage of stock, growth in population, lowering interest rates; SMSF’s gearing into property and overseas investor activity.
There are numerous measures which would suggest the housing market is overvalued, however there are other facts that counteract this assertion.

Unlike the US, Australia has a highly regulated banking environment that inhibits imprudent lending practice.  Leading up to the GFC the US lending institutions were combining the deadly lending cocktail of lo doc loans with high loan to value ratio (LVR).  LVR’s were in excess of 100% combined with honeymoon rates and the ability of the Borrower to walk away from the property in the event of default.  Large scale lending was being undertaken on this basis and the result was inevitable with arrears and mortgagee sales.  The imprudent lending was overinflating the prices beyond any realistic yield.  The domino effect saw the house prices collapse in the US.  Between March 2007 and March 2009, the median sale price of new homes in the US had a negative correction of 22%.  Prices have since moved beyond the former peak in March 2007.  Compound growth during the period 1980 to 2014 has been 4.3% pa (before adjustment for inflation).
US median new house prices 1980 to 2014 (Fed Economic data)

In Australia, leading up to the GFC, residential LVR’s were up as high as 100%, however the loan underwriting was on a full doc basis (at LVR’s above 60%) with income and employment stability verification.   This is significantly different to the US practice.  Median house prices in Australia corrected by 10% between Feb 2007 and Feb 2008.  Even with a market correction and a period of negative equity, the arrears levels were maintained at nominal levels as Borrowers were able to sustain loan repayments with stable income streams.  Prices will only ever collapse if the market is flooded with forced sales.

The above shows an annual nominal compound growth rate of 7.8% for the past 34 years, compared with the US of 4.3%.  However the real increase in prices is 3.6% after inflation.

The above shows that in 1980, house prices were 3.3 times average weekly earnings (annualised).  In 2014 that had risen to 7.0 times.  This is a strong indicator as to the reduction in affordability over that period.  Counteracting this is the ever increasing reliance on two incomes to service mortgage repayments.  This has been a significant generational shift and has enabled households to meet higher monthly repayments and higher rental payments.

Total household debt stood at $1.84 trillion at the end of 2013, equivalent to $79,000 for every person living in Australia at that time. This was higher than it had been at any time in the previous 25 years.  The following charts show the Real Household Debt per person between 1987 and 2013 and Household Debt to Household Assets (ABS).  This also points to the increasing burden of debt repayments and a reduction in disposable income after debt repayments.  Since 2011 these two ratios have levelled off and reduced respectively as households have made overpayments in the lower interest rate environment and asset values have increased.
Real Household Debt per Person 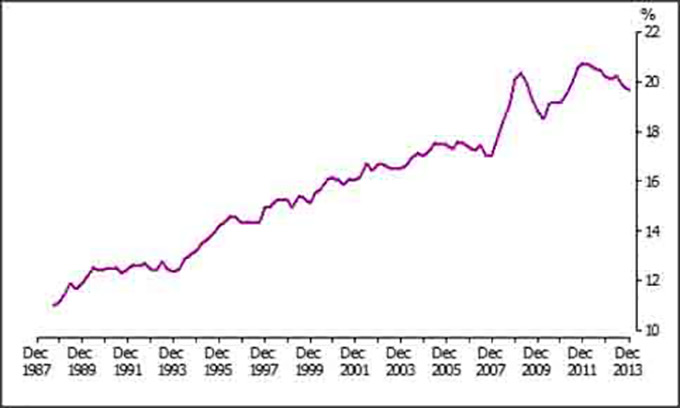 In 1980 Australia’s population was 14.8m.  In October 2014 it had grown to 23.6m, an increase of 8.8m.   This represents an annual compound growth of 1.4%.  This compares with the real increase in the median dwelling price during the same period of 3.6%.  Clearly the growth in dwelling prices has outstripped population growth during this period.

In the period between 1980 and 2014, the total number of residential dwellings approvals (across all dwelling types) was 6.9m.  Obviously some of these approvals will not have proceeded to construction however on raw numbers this shows a ratio of increase in population to new dwelling approvals of 1.3 to 1.0.  Recent activity in the fringe Western and South Western suburbs of Sydney and the fringe Northern suburbs of Melbourne has shown that demand has outstripped supply for new housing lots.  As soon as the lots went on the market, the lots were sold out in a day.  Purchasers had camped out overnight to secure a lot.  This is a clear indication of the pent up demand for housing lots in the Greenfield suburbs in the major capital cities.

Another strong buffer to significant falls in residential property prices has been the ongoing strength of the Australian economy and in particular, strong employment.  The unemployment rate in Australia has averaged 6.91% from 1978 to 2014. In September 2014 it stood at 6.10% which is the highest figure over the past 12 years. Trading Economics / ABS
It peaked in 1992 at 10.9% (in the recession that we “had to have”) and was at its lowest in 2008 at 4.0% (pre GFC).
Glenn Stevens summarises the current economic conditions in the RBA September release when it was decided to hold the cash rate at 2.50%.
Growth in the global economy is continuing at a moderate pace.  Commodity prices remain high in historical terms however have declined recently in areas that have impact on the Australian economy.  World markets are predicting continued low interest rates in conjunction with no adverse events.
In Australia, the most recent survey data indicates gradually improving business conditions and some recovery in household sentiment after a weaker period around mid-year, suggesting moderate growth in the economy is occurring. Resources sector investment spending is starting to decline significantly. Investment intentions in some other sectors continue to improve (including housing construction), though these areas of capital spending are expected to see only moderate growth in the near term. Public spending is scheduled to be subdued. Overall, the RBA still expects growth to be a little below trend over the year ahead.
Credit growth has picked up a little, including most recently to businesses. The increase in dwelling prices continues. The exchange rate, on the other hand, remains above most estimates of its fundamental value, particularly given the declines in key commodity prices. It is offering less assistance than would normally be expected in achieving balanced growth in the economy.
Looking ahead, continued accommodative monetary policy should provide support to demand and help growth to strengthen over time. Inflation is expected to be consistent with the 2–3 per cent target over the next two years.
On present indications, the RBA is pointing to a period of stability in interest rates.

Conclusions for the Australian Housing Market

When taken in isolation, the factors of affordability, price to income, and household debt to income would suggest the Australian housing market is overvalued.  However, when consideration is made of population growth, demand exceeding supply, interest rate environment and underlying economic conditions the current price points of Australian property are in line with historical growth trends.
Ultimately, the subdued growth in incomes will act as an inhibiter to rental growth and therefore rental yields.  As yields compress, the property values will reach a peak level at such point alternate investment options will become more attractive.  Any rise in interest rates will also act as an inhibiter to further price increases.
Rather than a price bubble with a significant correction in housing prices, a period of flattening or minor correction is considered to be a more likely outcome, particularly in the median price brackets.

Disclaimer
This information in this report is an opinion only and relies on various sources of information some of which has been cross referenced, extrapolated or interpolated at the discretion of the writer.