Bubble Talk – Is The Market Too Hot Or Not? 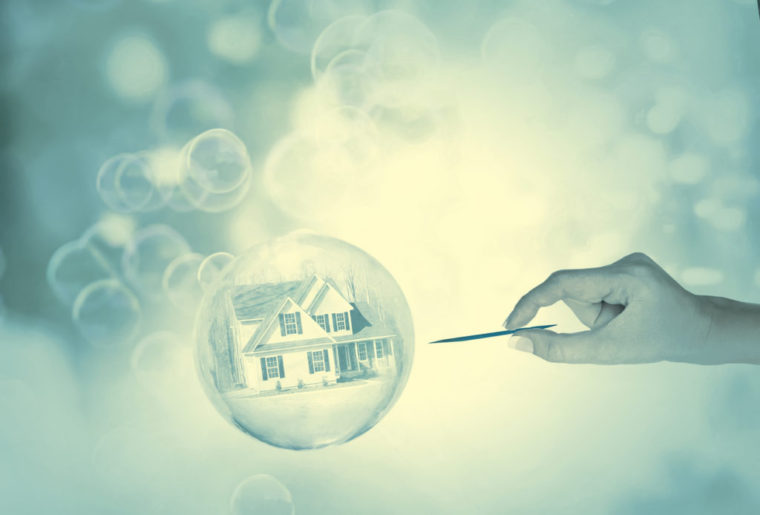 Bubble Talk – Is The Market Too Hot Or Not?

Introduction
The recent sharp rise in house prices in Australia’s largest cities has been driven by market fundamentals including strong demand, low interest rates and a lack of supply; and we are not in danger of a “bubble” as widely reported. 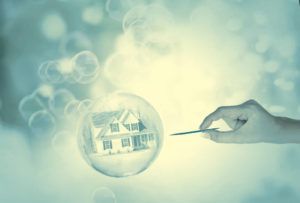 A significant fall in Australian housing prices (i.e. by circa 30%), as occurred in the US during the global financial crisis, is unlikely. Five years of significant growth has seen price gains in Sydney and Melbourne of approximately 70% and 57%, fueling bubble concerns. However demand for housing in Australia has been supported by domestic and international migration, foreign investment, low interest rates and an overall lack of new supply – factors which will avoid a crash in prices.
Although foreign investment has slowed and apartment supply has increased in some areas, the fundamentals remain strong. Yes, continued price growth at high rates is not sustainable, and a decline in price growth is inevitable. However wide-spread falls are unlikely to occur. Some pockets will be worse affected than others – high density areas with apartment over-supply may see some price reduction.
Australia has tighter lending rules than the US, which means that our mortgage default rates are lower and this plays an instrumental role in avoiding a potential ‘burst.’ Bank policies with regards to lending are a lot stricter in Australia, which helps to control property demand and price growth. It is a lot easier for US borrowers to simply walk away from their mortgages, which can lead to a “bubble” type environment more susceptible to price crashes.
This blog will examine what a bubble is, and the market factors which will see Australia as a whole avoid a bubble situation and subsequent price crash.
What is a “bubble”?
Many economists cannot even agree on what a “bubble” is, and therefore if it even exists.
The Business Dictionary defines a bubble as – “A surge in the market caused by speculation regarding a commodity which results in an explosion of activity in that market segment causing vastly overinflated prices. The prices are not sustainable and the bubble is usually followed by a crash in prices in the affected sector.”
Others define a bubble as existing when the price of an asset is over-inflated relative to some benchmark. However it can be very difficult for economists to agree on what that benchmark should be. The benchmark could be an estimate of the asset’s value based on variables that affect its supply, demand and price, so-called fundamentals. For houses, these fundamentals include population growth, tax policy, household size, household income, and many others. But economists cannot agree on what fundamentals determine an asset price, and how important each fundamental is.
It should also be noted that there is no such thing as a “national” housing market or bubble. While property prices may fall in the future in some markets, the price change is unlikely to be dramatic, and won’t be widespread across the entire market. The overall growth for capital cities has been fueled mostly by Sydney and Melbourne which have recorded higher growth rates than other cities. While some markets have experienced rapid price growth, this is not the case for Australia as a whole – there have been recent price drops in Darwin and Perth.
In a recent Finder.com.au article, Saul Eslake commented that a classic property bubble would have three main characteristics, as follows:

“Now, there are grounds for saying that the first of those criteria is true particularly in Sydney, but I would hesitate to say that there’s a compelling case that either of the other two criteria have been met even in Sydney. It would be hard to argue that credit is growing at unsustainable rates now, especially in the aftermath of the measures that have been introduced by APRA over the course of this year”, he says.
Price growth
Although the recent price growth in Sydney has been alarming, the long term average over the past 20 years is reasonable (around 8%pa), as Sydney had a period of minimal growth from 2003 to 2011.
BIS Oxford Economics expect Sydney property prices will fall in the next two years, while price growth in Brisbane and Melbourne will recede. They expect all Australian capital city markets to weaken in the 2017-18 financial year due to increasing supply, according to forecasts in BIS Oxford Economics’ Residential Property Prospects 2017 to 2020 report. The reports says that a stable economy and low interest rates would prevent an American-style crash, but there would still be price falls in some cities. In Sydney, median house and apartment prices are expected to fall 4 per cent by 2020. In Brisbane, house prices will increase 7 per cent, while unit prices will fall 7 per cent. In Melbourne, there is predicted to be growth for houses of 5 per cent over the same time period, but apartments prices would fall 4 per cent. Certainly not a crash by any means. 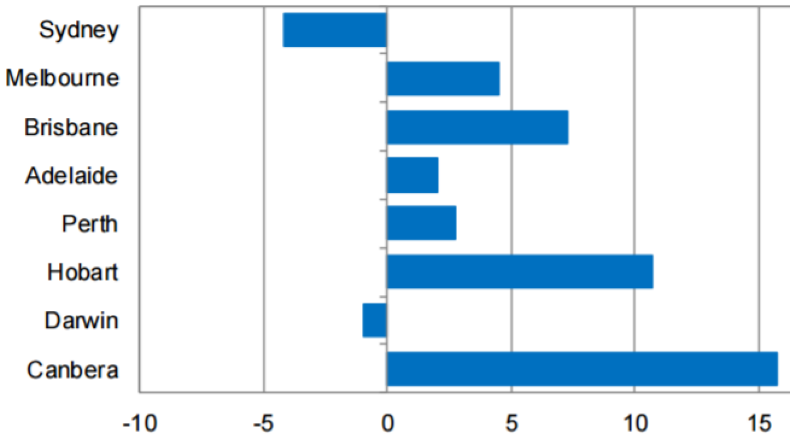 For a price “collapse” to happen, experts collectively cite that it would require a combination of a global economic shock or event, a dramatic fall in demand, rapidly rising interest rates, a relaxing of lending policies, or an oversupply of property; that would create a large number of forced sellers.
Interest Rates
Rising interest rates may play a role in affecting price growth because of the impact they have on the price of borrowed funds. However many borrowers have already built up buffers to avoid mortgage stress. Due to the current low interest rate environment, many Australians have been topping up their mortgage repayments and have therefore built a mortgage buffer. Data from the Australian Bureau of Statistics (ABS) indicates that just 4.3% of Sydney homeowners are vulnerable to an interest rate rise which suggests that only a small portion of Australians are susceptible to increased mortgage stress levels.
It is also unlikely that interest rates will rise significantly in a short period of time. Moderate increases over a longer period are more likely.

There is some media concern that borrowers may struggle when their interest only facilities convert to principal & interest (“P&I”) facilities. According to Core Logic, in the September quarter 30.5% of all new mortgage lending was for interest-only purposes. This was down from 36.2% over the March 2017 quarter and much lower than its peak of 45.6% of lending in June 2015. APRA has regulated that lenders can’t lend more than 30% of total new lending to interest-only purposes, so this figure is likely to fall further.
Interest rates are higher on interest-only loans, due to these steps taken by APRA. Borrowers, particularly in Sydney, are likely to have built up a sufficient mortgage buffer (as discussed above), and if they refinance may also be able to utilise a line of credit, in order to assist with meeting the higher P&I payments. Given these factors, we do not foresee that these loan conversions will cause any significant price corrections in the market.
Foreign Investment
Many believe that foreign investment is contributing to excessive property price growth in certain markets, notably parts of Sydney and Melbourne, with investment groups selling apartment stock to offshore Asian investors. The percentage of FIRB buyers increased in the last financial year, however it is less clear whether Chinese investors have contributed to rising property prices. Foreign purchases still only represent a small proportion of the total amount of property market transactions in Australia, and have generally been concentrated in more affluent areas rather than in areas where foreign investors have been competing with, for example, Australian first home buyers.
Population growth
Australia has extremely strong population growth; double that of many other countries. Melbourne’s population growth rate is currently 2.4%p.a. – which equates to approximately 120,000 new residents per annum, who all need a place to live. Strong population growth is a key to driving demand. Population growth in the USA is currently at 0.7% and has been below 1.0% since 2002. 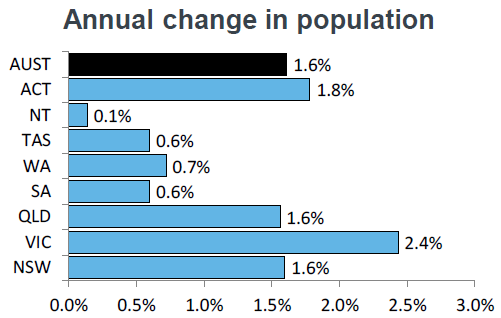 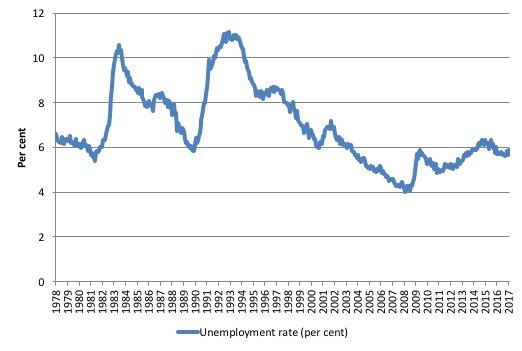 Gearing Levels
As a nation, Australia is not heavily geared:
Total value of residential real estate in Australia = $7.4 trillion
Outstanding mortgage debt = $1.7 trillion
(Source: CoreLogic)
Therefore the implied national gearing level is 23% LVR.
Whilst there have been periods of high LVR lending, particularly for investors, APRA has implemented measurements to curb excessive bank lending, and it appears to be working –

With fewer new mortgages being written with high LVRs it reflects the more conservative approach to mortgage lending being taken by lenders. This will lead to lower mortgage stress levels, which will in turn reduce “forced sales” and declining values.
Lending to both investors and owner occupiers remains strong, indicating continued strong demand for real estate –

Supply Levels
Residential houses in Australia are tightly held, and supply has been steady, as illustrated below:

There has been a spike in Apartment supply, however the majority of this has been well absorbed and will continue to be taken up over the next 2-3 years. Many projects have not proceeded due to difficulties in obtaining finance. There are certain small pockets where there is an excess of supply, and some price reduction is possible, however this is a topic for another blog!
Conclusions
As we see it:

All of these factors will avoid a major crash in prices across the market as a whole, and therefore we are not in the midst of a property “bubble”.

Author:
Adam Callaghan is an Associate Director with Development Finance Partners.  Adam has over 20 years’ experience in the real estate and finance industries in Sydney and Brisbane, having held positions at companies including Macquarie Bank, Grant Samuel, PPB Advisory and CVS Lane Capital Partners