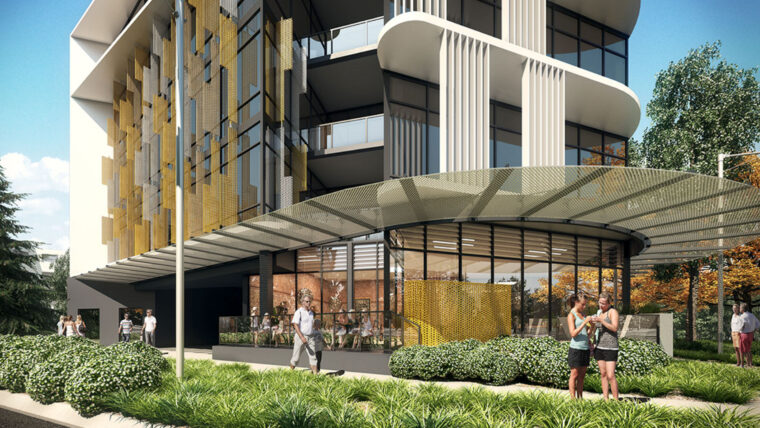 This article was originally published by The Urban Developer on 11 April 2022. It is reproduced here in full without amendment.

A construction project that started in 2014 will finally be completed in 2023, thanks to a tenacious developer who refused to give up and the backing of Development Finance Partners.

The $80-million mixed-used development in Perth should have been built and sold more than five years ago were it not for the worst property market downturn in Australian history followed by the Covid pandemic.

One Richardson-Richardson Centre comprises a 13-level residential tower and a 10-level commercial office building, on the banks of the Swan River, 2km from the Perth CBD.

DevWest Group executive director Chad Ferguson said their project had been proceeding “like a dream” until the WA mining boom came to an abrupt end in 2014.

“Around 75 per cent of the apartments were pre-sold, two-thirds of the office space was pre-leased to a single large tenant, and the build was going well,” Ferguson said.

“We had equity financed over $5 million in work on the basement and pilings, etc, and a bank had agreed to fund the balance of the project.

“Then almost overnight the bottom fell out of the Perth property market.”

The savage downturn was to see property prices in Perth tumble by 20 per cent over the next five years. The commercial market was hit early and hard, resulting in DevWest’s office tenant cancelling their leasing deal.

That led to the bank walking away from the One Richardson-Richardson Centre development and the dream suddenly became a nightmare.

“The entire WA economy spiralled downwards, and it was impossible for us to find another financier,” Ferguson said.

“It would eventually become the longest and deepest property market downturn in Australian history, and a lot of developers and builders went under.

“It was an absolutely hellish time and something that I hope never to experience again.”

DevWest was forced to release the deposits held on most of the pre-sold apartments, and for the next five years the project stood abandoned—but not forgotten.

“The site is close to the Kwinana Freeway, so I would pass it heading south out of Perth every Christmas or Easter when I took the family on holiday,” Ferguson said.

“Each time I saw it, I would get knots in my stomach because of all the issues and stress associated with it.

“Most developers probably would have washed their hands of it and just walked away. But we’re not the kind of guys who give up easily.”

In 2019, with market conditions improving, DevWest once again sought finance to complete the One Richardson-Richardson Centre development. They had just reached a deal with a Hong Kong-based private equity firm to revive the project when the pandemic hit.

“We were most of the way through the transaction, working on the last conditions precedent and the documentation, and then suddenly it was off,” Ferguson said.

“Like every financier at that point, if deals weren’t actually closed and documentation signed, they withdrew from all transactions they were working on because no one knew where the world was headed.”

One Richardson-Richardson Centre then sat for another 18 months until DevWest went back into the market for finance once more. This time, they were introduced to Development Finance Partners (DFP)—and the rest is history.

“As soon as we met the people from DFP, we could tell they were seasoned financiers,” Ferguson said.

“We had always known it was going to take a really experienced and sophisticated operator to see through all the history, the baggage and the very complex capital structure of this project to appreciate it for what actually was, and that’s what we found in DFP.”

“When we got involved, it had a long and troubled history and a number of previous attempts to revive it had failed for a variety of reasons,” Royal said.

“There was a large group of unhappy creditors, the previous financier had ended up in litigation with the developer, and the local community had lost confidence in the project because it had been abandoned for so long, making it hard to sell off the plan.”

With so many problems and outstanding debts, this was hardly a great starting point from which to invite a new lender to get involved.

“But the only way to untangle the mess was to get the project financed and buildings completed,” Royal said.

“As long as a project is stuck in the ground, it’s just dirt and no one’s getting their money back.”

By going back to first principles and re-designing the complex capital structure of the One Richardson-Richardson Centre development from the ground up, DFP was able to engage a new financier and convince the existing creditors to get behind a re-energised push to finish the project, finalising a $60m debt restructure and workout at an 80% LVR on completion.

“We worked closely with DFP for over a year and they introduced us to capital partner Centuria West, and together with their joint expertise and creativity finally brought the project back to life,” Ferguson said.

With builders back on site, apartments over 50 per cent sold and office leasing progressing well, One Richardson-Richardson Centre will in 2023 finally achieve a profitable conclusion for DevWest, almost 10 years after it was first conceived.

“It’s hard to describe what a relief it is to finally see the project through to completion,” Ferguson said.

“We stuck with it and managed to get it there, thanks to the good work of DFP.”

DFP has deep experience with project workouts and assisting property developers to turn around troubled projects, honed over many years of providing strategic advice, support and project management to ensure successful completion and profitable outcomes.

Speak to our experienced team today, to discuss your finance options.