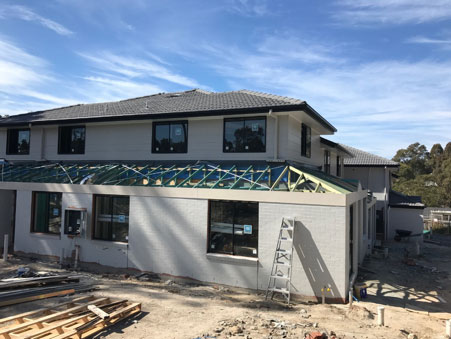 Urgent construction funding for half completed 5 townhouse development near to University of Newcastle.

The development is to comprise of 5 two-storey attached dwellings with associated fencing, retaining walls, car parking and five lot strata subdivision. At the time of engagement, the development was 42% complete.

The development group was established between 2 business partners after locating the suitable site and purchasing the site unencumbered. The Developer engaged a builder to commence as advice provide to them from friends, was as they had an unencumbered site and cash in the Bank to get 50% the way through, financing the site would be easy. Construction commenced.

Clients met with DFP 8th August 2017 following an unsuccessful finance application journey with their financier, a major Australian Bank. They are seeking urgent funds to reimburse part of funds expended to date and fund the balance of the construction through to completion.
Of the 5 Townhouses, the clients had exchanged 2 contracts to circa 90% debt coverage.
The clients had also independently engaged a Quantity Surveyor.
Their Major Bank had commissioned a valuation in June 2017, which supported the numbers for the deal however an issue around an access issue which subsequently was enough to stop the major bank from progressing the deal, which they then declined to proceed with, after some 3 months of discussions with the clients from the outset.

Following analysis of the deal and the subsequent meeting with the clients, DFP issued a service agreement and funding table 2 days later on the 10th August 2017. The clients formally then engaged DFP to proceed to secure funding for the development on the 16th August 2017.
DFP then under its engagement set out to secure funding with one of its private construction funders. The issues and brief were articulated with its underwriter and the access issue which was the catalyst for the Major Bank not proceeding was further explored and further advice from professionals and the client’s lawyers was provided to provide the private construction underwriter comfort and the ability to approve a facility of $1,770,000, with loan documents issued, sign and certified for initial settlement by 1st September 2017.
Further meetings held to finalise the access issues between the client’s lawyers and the Private funders lawyers has been held to finalise the access matter.

The client is now very happy that the construction funding is in place and initial drawdown has been effected and looking forward to now finishing the project which is now fully funded.

What the Client Says

Have a client who works for NAB and they referred us to a contact there to help with finance for our project. I dealt with them for 8 months before finding Development Finance Partners.  We were frustrated having been strung along by the bank who kept changing the goal posts.  We were at the end of our own funds and needed a finance solution.  I found Development Finance Partners on Google and I called up and I asked to speak to someone.  Baxter called me back promptly and we arranged to meet.  At the meeting they explained their business, at first I was slightly anxious about working with someone unknown however I couldn’t find any bad reviews or anyone who had had a bad experience so that helped me be more comfortable and we decided to go ahead.
Baxter and Bronko from DFP were great.  I found the speed that they were able to get things done really valuable  – they were very fast. Every thing they said they were going to do they did.
I would recommend them to other property developers, they are good guys.