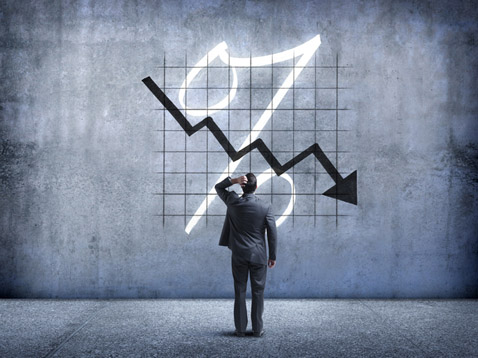 Why are interest rates falling?

Australia’s interest rates have again been a casualty in the battle against rising unemployment rates and a stalling economy – posing the question: what will happen when interest rates hit zero?

At the start of October, the Reserve Bank announced that it would cut the official cash rate to below 1 per cent for the first time. The decision to lower the cash rate to 0.75 per cent – a cut of 25 basis points – is the third cut since June, coming after the unemployment rate rose to 5.3 per cent at the start of the year.

The RBA has announced its intention to drive the unemployment rate down to 4.5 per cent – to a level of ‘full employment’ – and that it was prepared to ease monetary policy further to help support Australia’s economic recovery.

Reserve Bank Governor Philip Lowe has already indicated that further cuts are inevitable, highlighting grave concerns over low wages growth and frustration over the RBA’s inability to lift inflation. He called on the government and businesses to help reverse the decline in growth and avoid any potential of an upcoming recession.

What zero per cent interest rates mean for property developers

The official interest rate is what the RBA charges a bank to borrow money, which it then loans to home buyers or investors. As the rate gets slashed, money becomes cheaper and the banks are encouraged to pass the benefits onto their customers.

At the same time, the lower the interest rate becomes, the less interest people earn on their savings. Before the last round of cuts in June, the big four banks were paying very little interest on deposits. If a zero per cent interest rate comes into play, banks won’t have to pay anything to customers who bank with them, perhaps giving them even less incentive to save.

This has a similar effect on mortgage holders. As interest rates go lower, banks lower their own rates. But if Australia’s official interest rate nears zero percent it makes banks far less likely to pass cuts on, particularly if it will hurt their margins. This reluctance was evident in October’s cut, which showed the big four passing on only around half of the available cut.

Interest rates are imperfect by nature, in how they can boost people’s borrowing power but also increase the amount of money going into the real estate market. The RBA has already expressed concern over its cash rate cuts boosting house prices and creating a new housing bubble.

For example, even though the big banks have only passed on around half of the RBA’s most recent cut, this offer still gives a household with an income of $150,000, approximately $12,000 to $14,000 more in borrowing power. When people can spend more money on a limited supply of properties, it means that prices go up.

Rising prices effectively help developers by creating more favourable buying conditions and supporting an increase in construction jobs. The psychological effect on new and existing homeowners should also not be underestimated, when the value of their investments goes up or when they have more power to borrow.

The RBA will now have to wait and see whether increased consumer spending can reenergise Australia’s flagging economy or whether interest rate cuts will restore the country’s housing market.

How the big banks are reacting to falling interest rates

Despite Treasurer Josh Frydenberg urging the big banks to pass on the rate cuts in full, the major banks are not showing the same generosity they did for the 50 basis points of cuts in June.

CBA, which is Australia’s biggest home lender, made the first move to pass on just over half of the interest rate cuts. Key rates for owner occupiers were edged down by 0.13 per cent per annum to 4.80 per cent, while investors paying interest-only loans were rewarded with the full 0.25 percentage point cut.

NAB also held back a large part of the cut, passing on only 0.15 per cent to owner-occupiers who are paying principal and interest, as well as interest only. In an outsized move for investors, the bank cut rates for investors with interest-only loans by 0.3 per cent.

Why Australia is not alone

Low or even negative cash rates are not a new phenomenon for international economies. In the aftermath of the Global Financial Crisis, the short-term rate in the United States was cut to zero. The European Central Bank’s equivalent to our cash rate is minus 0.5 per cent, while Japan’s is at only 0.1 per cent (according to the Sydney Morning Herald).

Negative interest rates, while an unconventional form of monetary policy, are designed to lower borrowing costs to a point where banks are encouraged to lend, and people take more risks for greater returns. Every world market is using rates to drive down currency values and artificially increase competitiveness against each other until the inevitable correction comes.

Major socio-economic factors such as Brexit and the trade war have so far restricted world markets and caused pent up investment to build in countries and regions such as the United Kingdom, Asia and the United States. However, once these factors come out of play it will mean increased levels of investment inflation and rate increases that will quickly fill the current void.